What is Pulsed Electromagnetic Field Therapy?

Pulsed (PEMF) therapy is a safe, and non-invasive way to reduce pain and inflammation. It can be used to supplement and enhance currently existing healthcare modalities. PEMF can be thought of as a whole-body (100 trillion cells) battery recharger. According to Bryant A. Meyers, author of PEMF – The Fifth Element of Health, PEMF works by “improving adenosine triphosphate [ATP] production, increasing oxygenation, enhancing circulation, promoting hydration, facilitating detoxification,” and gaining a better overall absorption of nutrients.

How does it work?

PEMF uses healthy electromagnetic frequencies, as opposed to cell phone frequencies, to enhance overall health and wellness. Every cell in the body has a negative charge on the cell wall. For nerve cells, this is approximately -60 mV; other cells may vary in the net negative charge. To maintain healthy levels of this negative charge, potassium and magnesium should be contained inside the cells, while calcium and sodium ideally remain outside the cells.

There are scores of fundamentals—vitamins, minerals, hormones—that must be maintained at an optimal level for cell health. The pH of the blood, normally 7.4, is, of course, essential, as are significant excesses or deficiencies of nutrients; and numerous toxins must also be kept at bay. While all these factors play an important role in cell health, the electrical health of cells is one of the most critical of all the vital elements. 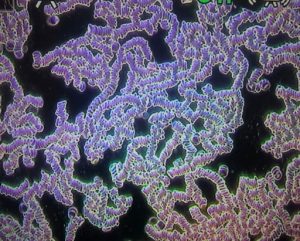 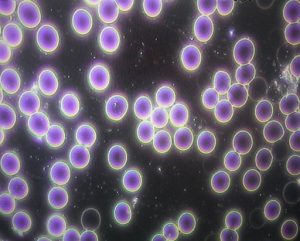 The pictures above are of red blood cells before and after a PEMF treatment. Taken using dark field microscopy, the first picture shows red blood cells that are stuck together. Simply stated, these cells have lost their charge and are no longer able to transport oxygen, uptake nutrients, or release toxins. A person with blood that looks like the first picture is often tired, fatigued, and may have high blood pressure. The cells should be free floating and bounce off each other, like you see in the second picture. The two pictures below were taken of the same individual a few days apart. The second picture was taken right after a PEMF treatment.

Your red blood cells were designed to deliver oxygen from your lungs to your tissues and to deliver carbon dioxide to the lungs. In order to do this, the red blood cell, must be maximally flexible and have the greatest amount of surface area possible through which to release its oxygen molecules at the right place. The tissue which needs the oxygen may be accessed through a big vessel (an artery) or tiny vessel (called an arteriole). When two, three or more red blood cells clump together it prevents the single cell from bending over to pass through the smaller arterioles. The result is that certain tissues do not get enough oxygen.

Font Resize
Contrast
Accessibility by WAH
Call Us Text Us